Homepage / News / In Novosibirsk there was an exhibition timed to the meeting of the State Council chaired by the President of the Russian Federation V. Putin

In Novosibirsk there was an exhibition timed to the meeting of the State Council chaired by the President of the Russian Federation V. Putin

October 7-9 in Novosibirsk an exhibition was held timed to the meeting of the State Council chaired by the President of the Russian Federation Vladimir Putin. For the visit of the President, they organized an exhibition containing the best and most advanced technological solutions in the field of construction, road mending and provision of transport infrastructure.

SPC “Armastek” participated in it within the framework of the general plan with the Union of Composite Manufacturers.

On October 7, the exhibition was attended by a delegation headed by the Minister of Transport Maxim Sokolov. The idea of using composites in road construction was approved. Corrosion resistance, comfort of installation and economical benefits of composites in comparison with metal analogues, emphasize the relevance of the given choice.

On October 8, Russian President Vladimir Putin visited the companies’ stands. He was suggested the technology of making and building all-composite bridges and pedestrian crossings, and also told about the advantages of using composite glass reinforced plastic in the construction of civil objects and the reinforcement of roadways.

Presented fiberglass reinforcement is considered to be Russian patented products of Armastek Company. It is 6 times lighter than iron, and it might be 10 times stronger when replacing. A prototype of reinforcement cage presented to the President became an example of these characteristics.

At the meeting with the President of the Russian Federation, it was mentioned that there are some problems that obstruct the development of the branch. Among the leading ones two obstacles were announced – counterfeit and bureaucracy. The extensive spread of counterfeit goods, which are weakly prosecuted under the law and have occupied an important market share of building materials for personal use and the DIY section, hinders the development of Russian producers and creates a bad product that is spread to a wide range of customers. And the inconsistency of actions of various departments because of “bureaucratic considerations” worsens this situation. 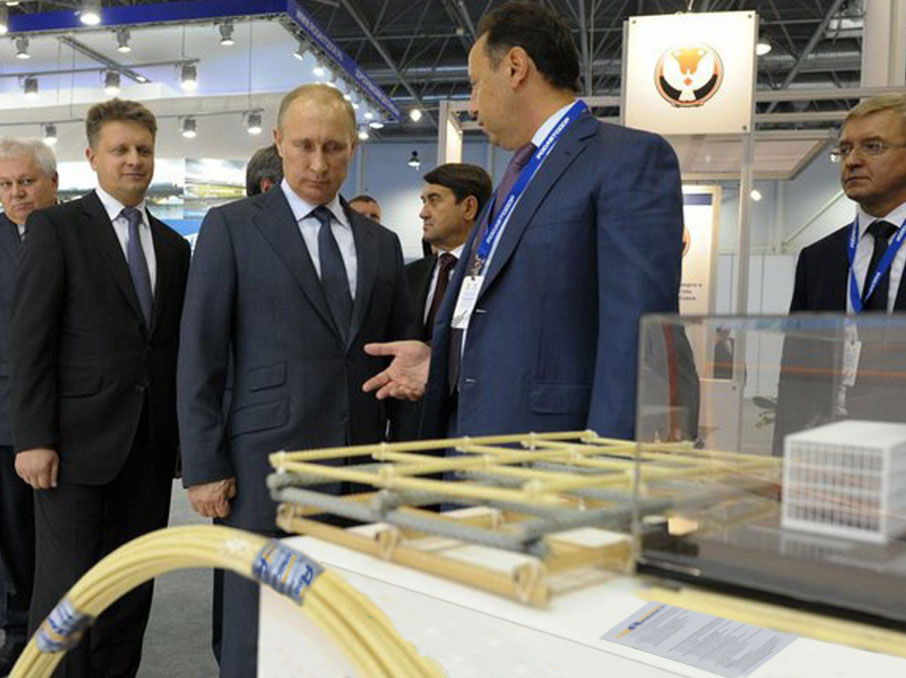